Join us for the League’s birthday celebration! The League is 100 Years old on Feb. 14, but we’re celebrating all year long!

After one hundred years of struggle, women finally received the national vote in 1920. We are celebrating the ratification of the Nineteen Amendment and the birth of our League of Women Voters organization.

A special video created for the event as well as a slideshow featuring archival state and local League photographs will be presented.

So much has been achieved in the last 100 years! We are thrilled to invite you, your family and friends for this once-in-a-lifetime event. We sincerely hope you will attend.

Nineteenth Amendment background from our documents.gov.

The 19th amendment guarantees all American women the right to vote. Achieving this milestone required a lengthy and difficult struggle; victory took decades of agitation and protest. Beginning in the mid-19th century, several generations of woman suffrage supporters lectured, wrote, marched, lobbied, and practiced civil disobedience to achieve what many Americans considered a radical change of the Constitution. Few early supporters lived to see final victory in 1920.

Beginning in the 1800s, women organized, petitioned, and picketed to win the right to vote, but it took them decades to accomplish their purpose. Between 1878, when the amendment was first introduced in Congress, and August 18, 1920, when it was ratified, champions of voting rights for women worked tirelessly, but strategies for achieving their goal varied. Some pursued a strategy of passing suffrage acts in each state—nine western states adopted woman suffrage legislation by 1912. Others challenged male-only voting laws in the courts. Militant suffragists used tactics such as parades, silent vigils, and hunger strikes. Often supporters met fierce resistance. Opponents heckled, jailed, and sometimes physically abused them.

By 1916, almost all of the major suffrage organizations were united behind the goal of a constitutional amendment. When New York adopted woman suffrage in 1917 and President Wilson changed his position to support an amendment in 1918, the political balance began to shift.

On May 21, 1919, the House of Representatives passed the amendment, and 2 weeks later, the Senate followed. When Tennessee became the 36th state to ratify the amendment on August 18, 1920, the amendment passed its final hurdle of obtaining the agreement of three-fourths of the states. Secretary of State Bainbridge Colby certified the ratification on August 26, 1920, changing the face of the American electorate forever.

Join us for LWV Umpqua Valley’s birthday celebration on Feb. 13.

This year we celebrate along with hundreds of other local Leagues around the country the centennial birthday of the League and the 100th anniversary of the ratification of the Nineteenth Amendment.

Please come to celebrate whether you are a member or not!

Come for cake, some history, some discussion, ask questions, and enjoy your neighbors.

The Umpqua Valley League has joined with the Umpqua Valley Quilter’s Guild as a silver sponsor for the 2020 Quilt Show to be held on April 24, 25 & 26, 2020. Our membership is very excited about this!

Here’s a photo from a poster showing a Suffrage Quilt from 1992. 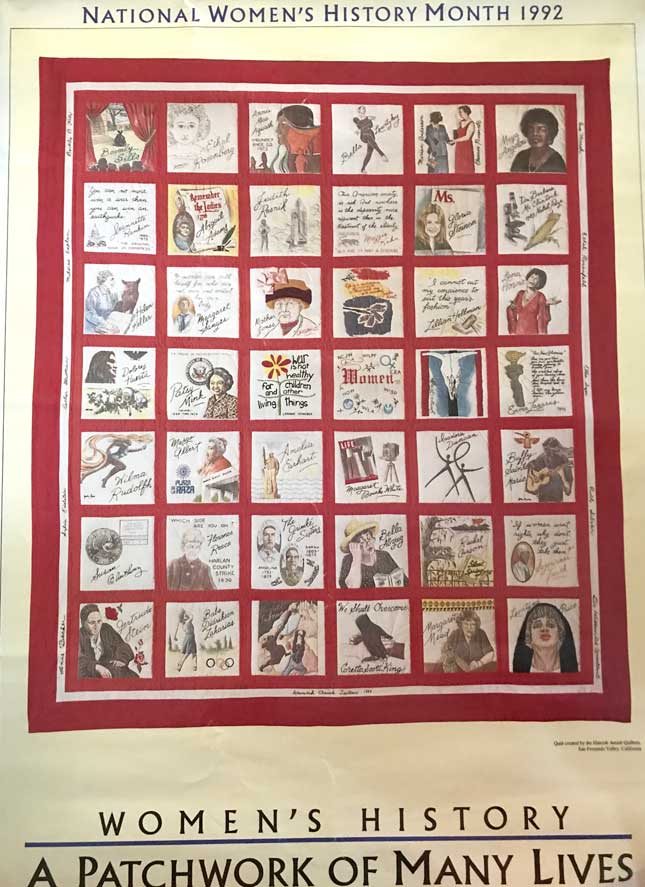 Let's chat about it!